“The Globe’s commitment to covering the coronavirus pandemic continues unabated, as today’s paper and website make plain, but we thought a bit of a diversion might also be welcome.”

An ex-con looking for the score of a lifetime.

A priceless haul of stolen art.

A professor who uncovers a secret that could change the world.

And a mystery as old as the country itself…

A mystery that someone’s willing to kill for.

If that sounds like a mashup of “Rounders,” “Ocean’s Eleven,” “The DaVinci Code,” and “National Treasure: Isabella Stewart Gardner Museum Heist,” you’re not too far off. But that’s the log line for a series The Boston Globe began running Sunday: a serialized novella called “The Mechanic.”

The author is Ben Mezrich, best known for his nonfiction books on gambling and for having written the book that became the basis for “The Social Network.” (When I looked at his Twitter account this morning, the “Who to Follow” recommendations included both Winklevii.) He is also, importantly for these purposes, a Bostonian.

The Globe has published the first four chapters as of this morning; the remaining 18 will spool out over the next two weeks. It’s getting front-page treatment; it’s a great opportunity for any corrupt Boston pol to say, correctly, “That story on the front page of the Globe? Never happened.” 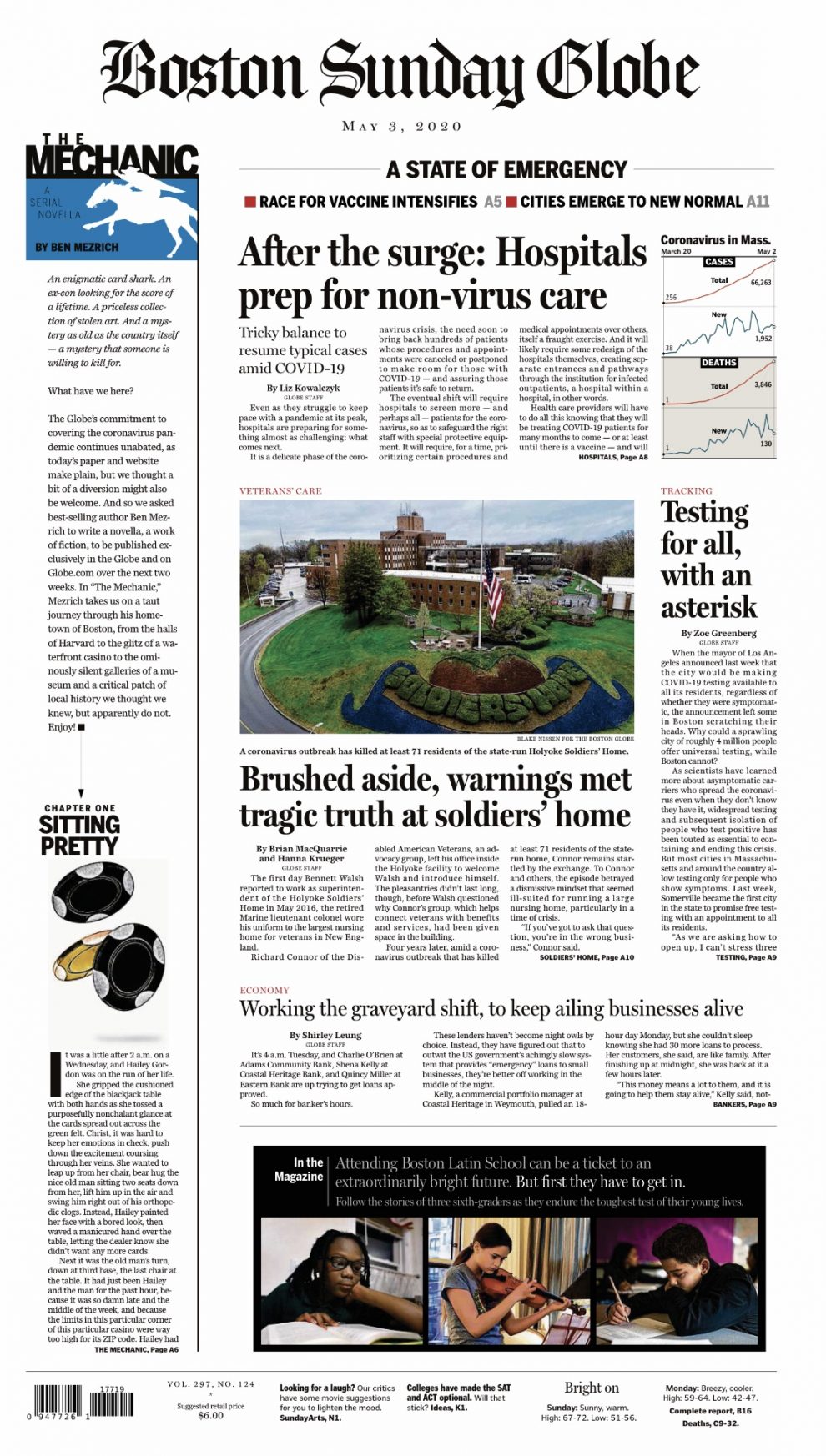 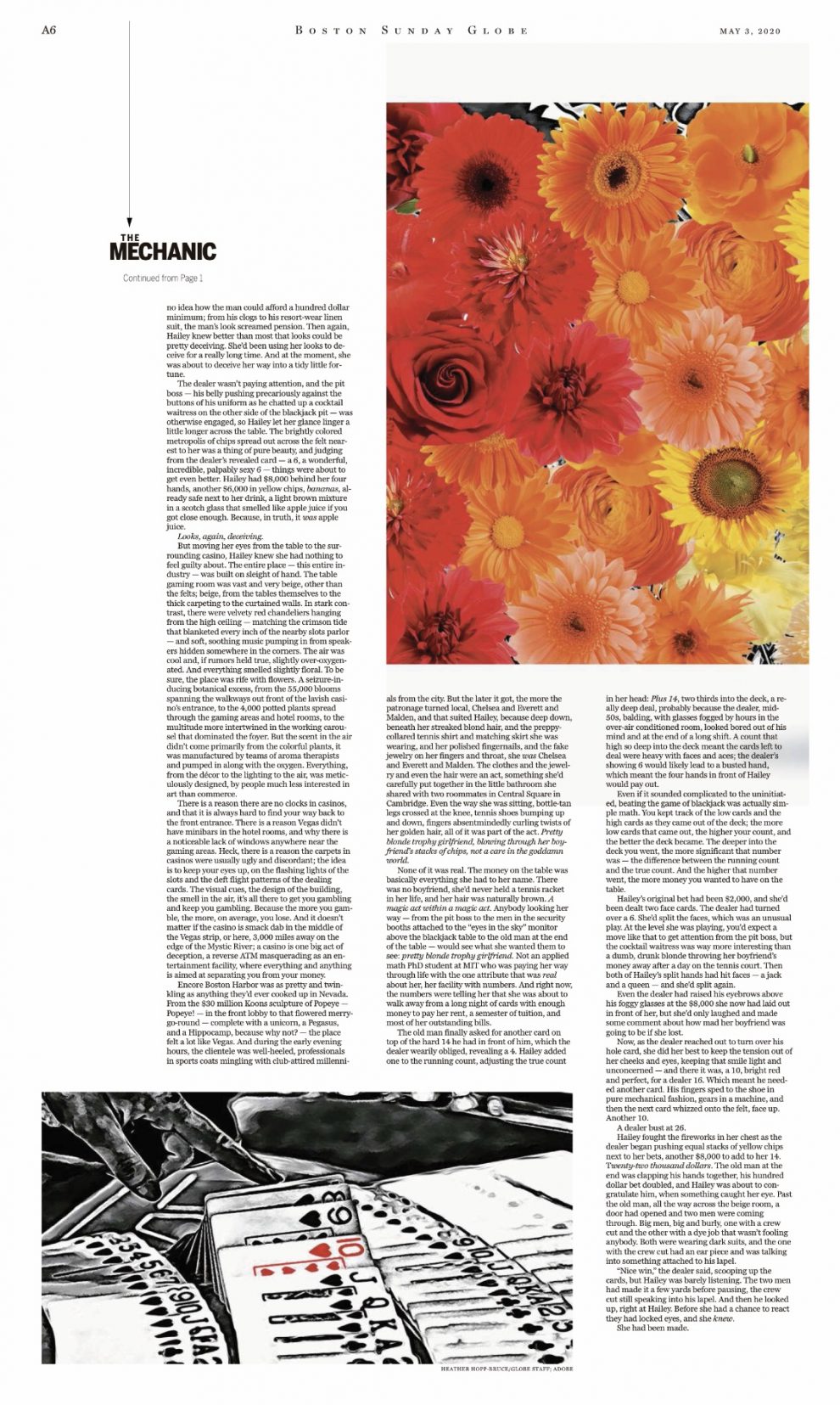 Serialized fiction has a long and storied history on newsprint. It was common in the 19th and early 20th century; more recently, it’s been a tool someone remembers to use every few years to get people hooked into a daily habit — an increasingly important factor after the shift from daily print to whenever digital.

In 1999, a 29-part novel by Roy Peter Clark ran in what were then The New York Times’ regional papers. (“The adventures of a St. Petersburg, Fla.-based investigative reporter on the trail of a doomsday cult with cataclysmic plans for the turn of the century.”) In 2007, The Washington Post ran a reporter-penned thriller called “Jezebel’s Tomb.” (“It features a journalist who investigates a bombing and tries to track down a mysterious 2,000-year-old document that may hold a dangerous secret.”) The Guardian serialized a Chris Ware graphic novella in 2014. The New York Times regularly ran serial fiction in the late 2000s, including works by Michael Chabon, Patricia Cornwell, and John Banville.

But those appeared in somewhat more normal times; the thinking here is that, when the world’s on fire, people could use a taut narrative to get lost in. As the paper put it: “The Globe’s commitment to covering the coronavirus pandemic continues unabated, as today’s paper and website make plain, but we thought a bit of a diversion might also be welcome.”

Enjoyed the first two installments of The Mechanic,’ by Ben Mezrich https://t.co/Ke3YOx5MGJ Thanks @BostonGlobe ! It’s great to read something other than CV19.

I’m a little obsessed with @benmezrich’s writing, so it’s pretty cool to have him partnering with the Globe for his latest project. https://t.co/aw0rYPauWn pic.twitter.com/hR1THxIluD

Today the Boston Globe, in an effort to offer “a bit of a diversion” for readers consumed by Trump’s hourly fumbling, constant lying, and utter incompetence, begins a serialized fictional mystery by Ben Mezrich: “The Mechanic.” https://t.co/C9cdJHiTEZ

The serialized new novel, The Mechanic, by @benmezrich will be published in the @BostonGlobe, chapter by chapter starting this Sunday for two weeks. Read along with this fun Boston mystery – stolen art, card sharks, ex-cons, and more. #themechanic https://t.co/ZCHGM7YLSv